Transnet’s Thornwood Railway Station, located west of Durban, and the steep embankment on which it is situated, forms part of the critical national railways network line that transports goods between Johannesburg and Durban. Excessive geotechnical movements were identified at the embankment of the station, prompting national rail company, Transnet Freight Rail to act accordingly to avert a possible total collapse of the infrastructure.

Excessive movement was first reported towards the end of 2012, resulting in slope failures. A temporary solution was constructed in 2013 in the form of rock-filled gabion baskets to stiffen the slope and stabilise the failures that occurred in critical areas. High rainfalls, however, caused further instabilities and slippages became more severe despite the measures put in place.

Permanent lateral support solutions were thus prepared. The supply and install tender was sent out by Transnet, which comprised 44 cable anchors that would be permanently fixed into a 132-m-long by 3-m high bearing wall to arrest all future movements. The infrastructure and reinforced concrete bearing walls were constructed by others. However, prior to Keller’s involvement, the installation of the anchors was not successful, and tenders were then sent out again for the installation of these technically challenging anchors. 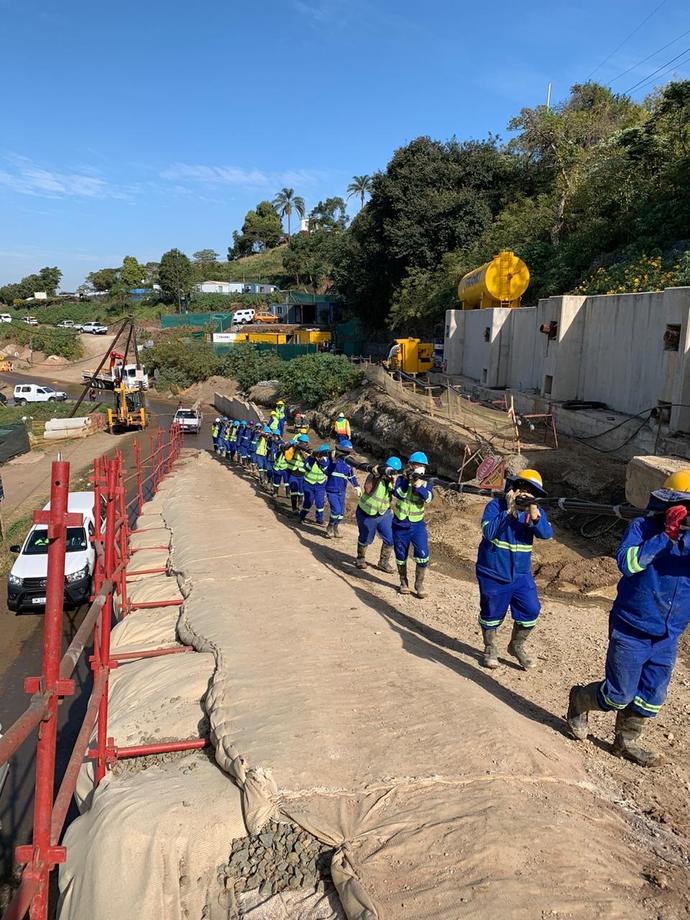 Anchor on its way to be installed

Keller recognised the technical difficulties and the challenging conditions that the installation of the anchors posed. After several technical meetings and discussions, the Keller team formulated a feasible and constructible solution. Keller offered a design, supply and installation solution comprising 132no. permanent ground anchors of up to 40 m in length.

Transnet in turn accepted the proposal and provided support on the project in the form of its own principal contractor, RME, to deal with the many peripheral challenges that are associated with this ‘thorny’ contract that has bedevilled the rail agency for the past seven years.

Keller was appointed by Transnet Freight Rail in August 2019 to proceed with the design, supply and installation of the 132no. by 40-m-long 830kN permanent cable anchors. A two-month timeline for the design was agreed, with a further 10 months for the supply and installation of the anchors after working platforms have been constructed by RME, which means that completion was set for March 2021.

Shortly after being awarded the contract, Keller was asked to hand over the rail sooner than anticipated as one of the two rail lines had to be closed and this caused a bottleneck that severely restricted the volume of trains on the network.

The Keller team came up with an amended scheme aimed at completing the most critical areas and subsequently managed to successfully hand over to Transnet, allowing the trains to be running four months earlier than anticipated – by October 2020.

There were several other challenges the Keller team had to contend with. Firstly it was the inconsistent ground conditions before the competent rock, which made drilling conditions extremely challenging. Drilling through a previously constructed gabion wall of up to 3 m thick, followed by overburden with a mixture of clay, sand and boulders (up to 3 m diameter), was no easy feat.

The drilling rigs used on the contract were two Casagrande C6 machines. Meanwhile, a Symmetrix 193 casing drilling system was utilised for drilling of the cased portion over the free length portion of the anchor holes. The casings were advanced until competent rock was encountered, which was up to 40 m deep.

The fixed length portion of the anchor was then drilled past the casing into the competent rock utilising a conventional 6” DTH hammer and a 165 mm drill bit. Due to the high comprehensive strengths on the competent rock (up to 250 MPa) and highly fractured in some places, special modified drilling bits were used.

To assist with the flushing during drilling through the fractured rock, a mixture of drilling foam was injected into the air supply. The drilling foam also acts as a cooling medium for the drill bits during hard drilling.

Secondly, a two-way road nearby had to be reduced to a single-lane road to accommodate the formation of Keller’s drill rig working platform. Despite these efforts, the working area was still confined. Traffic control was put in place to ensure minimal disturbance to the community road.

The COVID-19 pandemic brought a complete halt to many construction projects in the country, including the Thornwood embankment project, towards the latter part of March 2020. The project resumed mid-May under strict regulations stipulated by the government. There was a shortage of critical supplies during this period as most industries had been working with reduced resources.

Despite these challenges, the project was still delivered on time. Key to the success was Keller’s experience in delivering such challenging projects, as well as the client’s commitment in working closely with the geotechnical contractor to face the problems head on.

Keller is proud to have partnered such a progressive client in dealing with this very challenging and demanding contract. The geotechnical contractor is also satisfied that the efforts and commitments from both parties have proven to be a success. 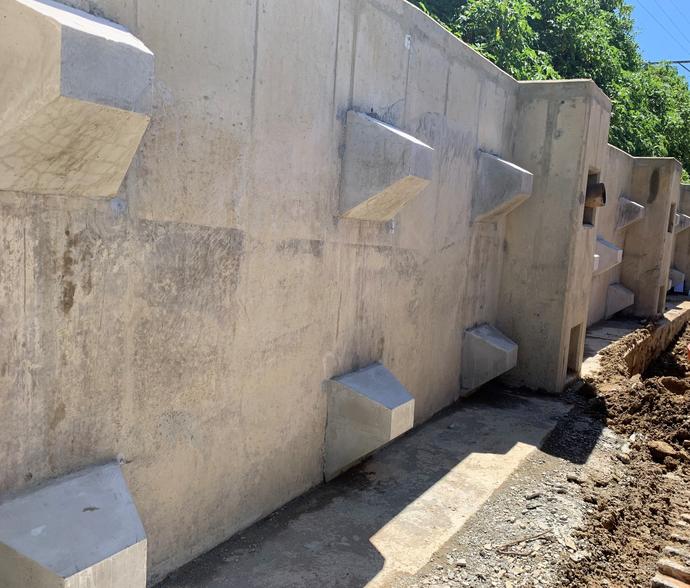